A podcast discussing news of note in iOS Development, Apple and the like.

Towards a Better App Store: Part 2

Make it up in Volume

This is Part 2 of an ongoing series trying to explore practical ways that the App Store could be better for customers. Today I’m going to talk about the Store’s size.

The size of the App Store’s catalog is often thrown around as a valuable, useful metric for judging the heath and vitality of the ecosystem. That may have been true before a certain scale. There is value in having a diverse and deep inventory that mets every need but beyond a certain point it completely looses relevance. Duplication, ‘spamming’ and decay of older apps hurts the store more than helps it. In many ways the incredible volume of the Store is at the core of many of the other challenges it faces. App Review takes longer than developers would like. Search becomes tricky. Editorially curating new arrivals becomes daunting.

It isn’t an easy problem to solve. How do you determine which apps should be allowed in which should not. Just how many Flappy clones should be allowed to exist in the Store? 5, 10, 1000? It isn’t just the overall size that is a problem though, the rate of increase is also increasing. 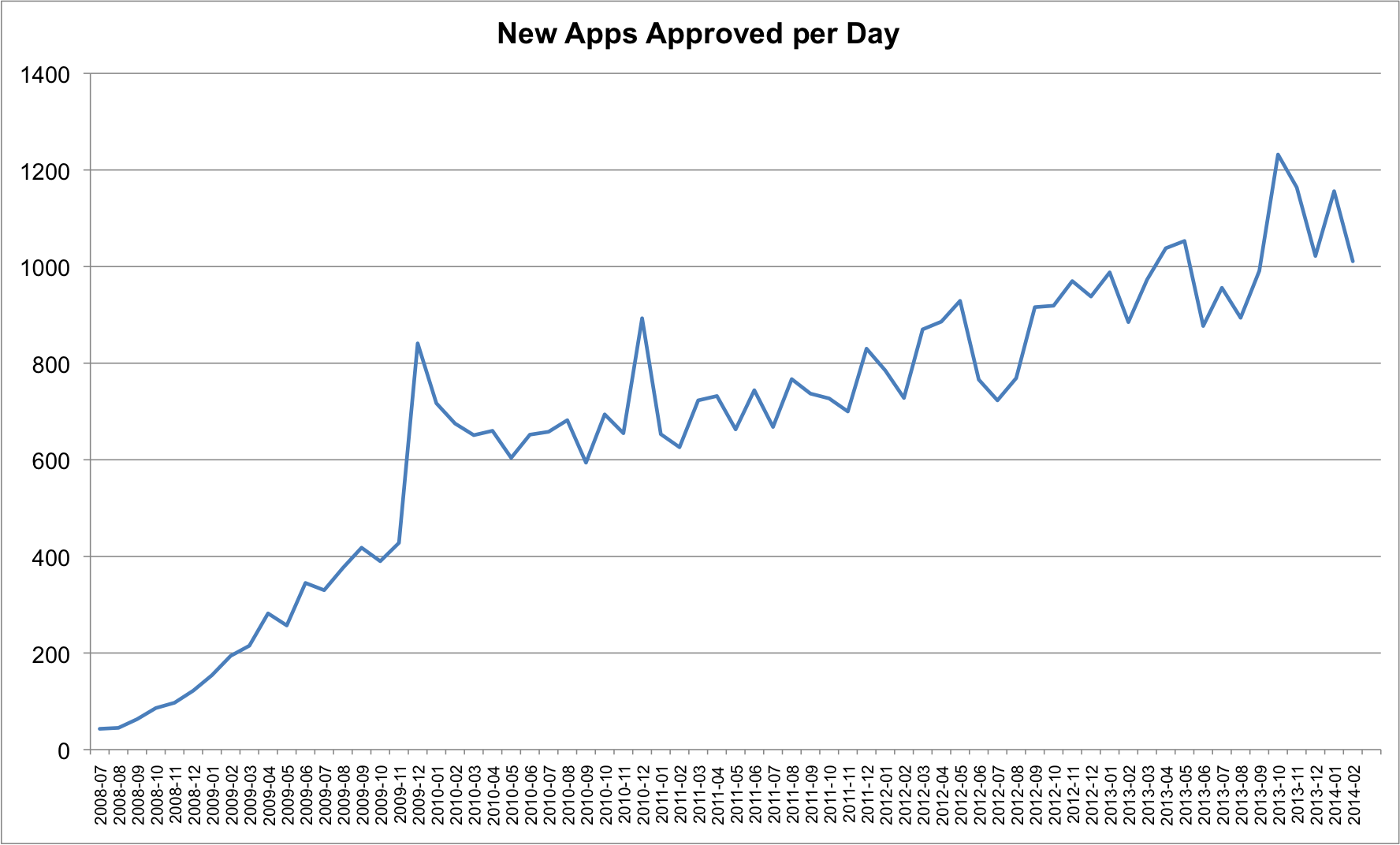 This is only new apps approved on the store (taken from 148Apps), add to this updates and it is an incredible volume.

Also, how many of the apps on the App Store are being actively maintained. I’d guess the number is pretty low but the old apps still stay there. Buoying the numbers but not actually providing good value to

I had initially gone down the road of trying to work out ways to make judgments about which apps are the ‘good’ ones and which ‘deserved’ to be in the Store. It very quickly became clear that this was nearly impossible to do. While I (personally) can look at apps on the store and say they don’t belong, based on my own tastes. This never generalized. The App Store would be worse off if it were filtered with too harsh an opinion. I had also thought of applying other external limits on the number of apps. Things like raising the cost per submission or number of new apps per developer per year. These would only really affect the current trend of re-skinned apps (which can be better addressed directly), I’d rather have things simple for the majority than punish everyone for a few bad apples.

I’m reminded of a parenting adage. Have few rules but strictly enforce them. I think this would do much to improve the situation on the Store. The App Review Guidelines are a pretty solid set of rules. They have evolved and adapted to the times but overall they do a pretty good job of keeping out the stuff that is objectively ‘junk’. There are of course grey areas, as there should be, but I don’t have too many complaints with the guidelines we have today. The area that I think we could do much better on is the way in which they are enforced. Specifically, when they are enforced. As best I can tell, other than in exceptional cases once an app is approved it is always approved.

#1: Apps should be required to pass approval on an ongoing basis.

The purpose of the having app review and rules about what constitutes an acceptable app is to form and direct the content of the store in the customer’s favor. This applies to things like avoiding crashing, malware ridden software. It equally applies to establishing a baseline of design and development standards that everyone must meet. Having things like the Human Interface Guidelines (HIG) as a requirement for submissions establishes a bare minimum for quality for all apps. However, the App Store is a vibrant, ever moving ecosystem. What was acceptable a few years ago is likely not today, at least not without any adaptations. This applies most concretely to supporting new versions of iOS. Since February 1st all new submissions just be built against the latest SDK and be “optimized for iOS 7”. If that applies on the front end, it should be reapplied to the back-catalog as well.

Exactly how this would be applied doesn’t really matter. It could be applied on a monthly, quarterly or (honestly) even annual basis. The important thing is that it would create a Store where any app a customer purchases would be assured of meeting and complying with the current set of guidelines. The stated goal of the Guidelines is to “ensure they are reliable, perform as expected, and are free of offensive material.” I believe every app on the store should meet those criteria.

If older apps no longer meet the stated guidelines for what an app should be they should be de-listed (still available to re-download if already purchased). Leaving space on the virtual shelves for apps that provide the best possible experience for customers. This would constitute a lot of work for the App Review team, but I think it is hard to argue that the result wouldn’t be worth it for customers.